Located on a rocky promontory overlooking the sea, the Principality of Monaco, famous for its casino and its riches, is a tourist center of the first order. This tiny country owes much of its popularity to its current sovereign HRH Prince Rainer and his late wife HRH Princess Grace, desgraciadamente ya fallecida. The name of the state appears to derive from the Roman Portus Monoeci, te ancient port of Hercules, spoken of in many a Mediterranean legend. Monaco, with its tranquil port and almost constant sunshine is a benevolent oasis. It is like a white sea bird flying between the sea and the sky. Monaco is a sizable city, the capital of a dream realm.

The Principality comprises: Monaco, the old town, the Condamine, the port area, the new town and Monte Carlo, the rock upon which can be found the Casino and many luxury hotels. The remains still preserved in the surrounding area bear testament to Monaco's history. There is the cave of the skeletons, where the bones of the first inhabitants of the Mediterranean were found. Around the hills can be discovered the vestiges of the massive wall which once enclosed the old city, turning it into an impregnable fortress and adding further to the port's tranquility. It was a place where, according to Virgil and Lucian: ,,neither the Eurus , nor the Zephyrus could enter''.

In 43 BC, Julius Caesar concentrated his army in the port of Monaco, while we awaited the arrival of Pompey, who had taken refuge in Illyria. In the 12th century, Frederic Redbeard, the Emperor of Germany, gave Genoa sovereignty over Monaco and the entire Ligurian coast. It was at this time that a great Ligurian family, the Grimaldis, began to play a leading role in the history of Genoa. The Grimaldi were Guelphs who went into exile when the Ghibbellins seized power in 1295. Francois Grimaldi became the master of the Rock of Monaco after entering the fortress disguised as a monk. From that moment on, the power of the Grimaldis over Monaco would be consolidated France than annexed Monaco in 1509, but the Grimaldis regained autonomy for their tiny state thanks to the treaties of Burgos and Tordesillas.
The lord of Monaco then was Augustin Grimaldi, the bishop of Grasse, protected by Charles the Fifth. In 1529 the Emperor stayed at the castle for three days. Later the Princess of Monaco enjoyed the protection of France, but during the French Revolution, Prince Honore the third was dethroned and would later die in Paris in exile. After the treaty of Vienna, Monaco was placed under the protection of Sardinia and remained an Italian protectorate until 1860, when it once again came under the guardianship of France. The Principality enjoyed an epoch of splendor under Charles Grimaldi III who dedicated his life to the reconstruction and established amicable relations with France. It was during this era that Monaco began to acquire fame as a cultural center and a tourist resort, a fame which hasn't stopped growing during the reign monarch HRH Prince Rainer the Third. Among the Historical monuments of Monaco, pride of place must go to the Grimaldi Palace, symbol of the historical continuity of the Principality.
Its halls make up an interesting museum with tableaux by Giorgione, Holbein, Van Loo, Champaigne, Rigaud and other artists. There is also Japanese furniture, Venetian antiques, a fresco portraying ,, Renown leading the Army of the Grimaldi, and the bed wherein the Duke of York died at the end of the 18th century. It is also remarkable for the Palace Archives and the Napoleonic Museum with a collection of coins stamped in Monaco and other souvenirs of the Napoleonic era. 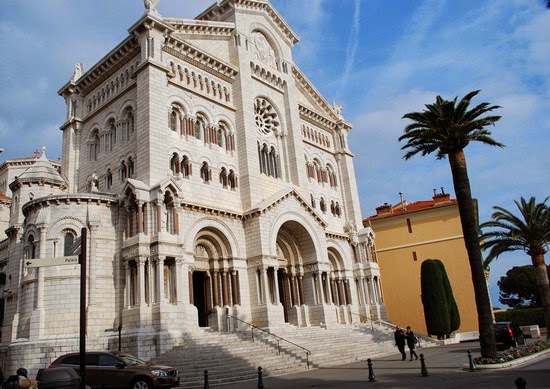 The Cathedral is the most important Monegasque architectural feature. Erected at one end of the town, it was built between 1875 and 1884 under the direction of the architect Lenormand. Also worthy of mention are the Musee d'Antropologie, the Musee National, the Musee de Cirec (Wax Museum, the Center de Acclimatation Zoologique, the Musee Oceanographique, and the Casino de Monte Carlo). The Casino is an exquisite example of the ,,Liberty'' style, while its halls are decorated in a baroque style.

***** Riviera Marriott Hotel - La Porte De Monaco
Casting a serene reflection upon the Cap d'Ail harbor on France's Cote d'Azur, the Riviera Marriott La Porte de Monaco Hotel captures the spirit of Monaco. It's a magical place, where you can loose yourself in its fragrant breezes, profound beauty and international allure. As one of the premier hotels in Monaco, you'll be introduced to a superior level of service and amenities.

***** Hotel La Perouse - 11, Quai Rauba Capeu 063000 Nice
A hidden gem of the French Riviera built on a promontory next to the sea, the establishment offers  the most beautiful view of Nice and the Bay of Angels. You arrive through a discrete entrance, as if you were visiting a private home. Next, an elevator takes you to the heart of this high perched building filled with charming labyrinths and clinging to a steep hillside covered with luxurious Mediterranean vegetation. The impression of a patrician mansion is reinforced by warms tones on the outside facade, contrasting with surprisingly contemporary furnishings made in fine materials on the inside.